By CONNOR MCILWAIN
Posted on November 4, 2015

On a campus filled with history, it’s easy to overlook the signifi­cance of Vassar’s larger community. But just like Vassar, Poughkeepsie has a rich history. From producing the first cough drops in the U.S. to becoming a bustling hub for IBM, Poughkeepsie’s beauty and proximity to New York City has attracted an array of business­es and elites.“

There is just something about the place that keeps calling me back,” said Elizabeth Thompson ’11 of Poughkeep­sie. She is the Director of Media and Operations for the Bertrand Delacroix Gallery (BDG) in the Chelsea neigh­borhood of Manhattan. The gallery just wrapped up its exhibit “Works on Pa­per,” which featured a series of Pough­keepsie-inspired watercolor paintings by artist Mitsu Haraguchi.“

Works on Paper” premiered Oct. 1 featuring five New York City-based wa­tercolor artists. One of the featured art­ists got a group together, which includ­ed Haraguchi. Thompson explained, “We…represent American watercolor artist Elizabeth Allison, and have for several years. She actually shares a studio with Mitsu in Harlem and they studied under the same teacher, Paul Ching-Bor, at the The Art Students League of New York. Elizabeth introduced the gallery to Mitsu’s work and the work of all the other watercolor artists that make up the Works on Paper show.”

Haraguchi’s resonated with Thompson par­ticularly because of her time at Vassar. “Mitsu’s work stood out to us because of its unusual sub­ject matter, skill, unexpected approach to water­color and the brilliant use of color,” she said. “To me, of course, it stood out because Poughkeep­sie played such a meaningful role in my life.”

Haraguchi contributed a series of house-scapes to the exhibit, which are based on homes and sites he saw during a visit to Poughkeepsie in the summer of 2014. In an interview on BDG’s website, Haraguchi explained his interest in Poughkeepsie, “[I] immediately fell in love with the place. The town has a rich history dating back to the era of American Revolution. I am particularly attracted to historic sites and old buildings (e.g., 19th century Victorian style, co­lonial style…etc.). It also used to be a capital of New York state a long time ago.”

But the house-scapes in the exhibit show the Poughkeepsie students all know. Haraguchi de­scribes this modern Poughkeepsie as a relic of its rich past. “At present, however, you see the remains of those glorious days. After a major corporation left, things went south. Some say that nursing homes are currently one of the biggest industries there,” he explained. “You may wonder, how did I become attracted to the place? I don’t know.”

Urban Studies student Anna Beeman ’18 spent time studying Poughkeepsie. While her research has focused mainly on inequalities in Poughkeepsie, she noticed how important art and culture are to the city. She explained, “I think Poughkeepsie is cool because it has so much potential. In my current field work I am learning how important art and culture plays in a role of revitalizing the city. I definitely think that Vassar students should look into different events in Poughkeepsie- its actually incredible how much goes on with events, art exhibitions, lectures, movie screenings, etc.”

Thompson echoed Beeman’s encouragement for students to explore Poughkeepsie. “I hope… [students] continuously look at Poughkeepsie with new eyes, as a city with a deep and complex history and a positive, flourishing future,”

She continued, “I hope they see the beautiful homes and colors and insight Mitsu offers and make the most of the city during the years they spend there. Vassar is great at offering students the opportunity to leave the campus and explore more of the unknown Poughkeepsie—and I urge students to take advantage of this.”

According to Haraguchi, outsiders have a unique ability to explore these elements. This perspective helped shape his Poughkeepsie paintings. He explained, “Although I have been living in New York City for about two decades, I was born and raised in Japan. I am an outsider. However, sometimes an outsider can see things, which locals take for granted, from a different perspective. In my paintings, I may take advan­tage of this outsider’s point of view in order to express my feelings toward the town.”

As students, we too are outsiders. “As a Vassar student, I was both uniquely connected to the town as I was a resident for 4 years, and unique­ly separated as I spent so much of that time on the Vassar campus itself,” explained Thompson.

With this perspective, Haraguchi depicted several homes in Poughkeepsie in watercolor. The depictions look eerily familiar. According to Thompson, “Several people have immediate­ly recognized the homes as Poughkeepsie based while others have commented on the universal aspect of the works—that they could be mysteri­ous houses in any location.”

According to BDG’s description of the exhib­it as a whole, “The works blur the line between figuration and abstraction.” But for Vassar stu­dents, there is only the line separating campus from the outside community. And for those un­willing to cross over, or those simply in the mar­ket for some pricey dorm decorations, Haragu­chi’s works from the exhibit are for sale through BDG’s webpage. 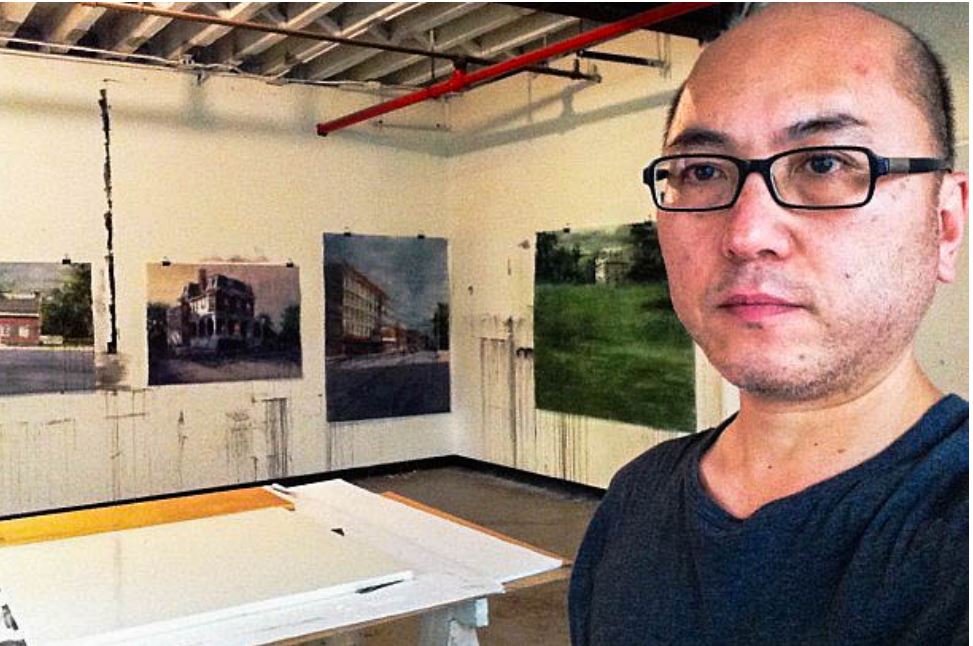